Roz went to do a night check and found a very large, female wombat sitting at the gate of the main house yard.

The wombat had obviously been attacked by dogs. Both ears were shredded leaving little that even looked like an ear.  The wounds were full of maggots, she was thin, in pain and her abdomen was distended.  She just sat there as Roz and Kev went over her trying to assess the damage and her condition…..then they felt the scar on her hip.  It was Lucky!

Released 3 years ago, Lucky would periodically call in but had not been seen for several months.  Lucky was given pain relief, a sedative and her visible wounds cleaned as well as possible in the dark.  In the morning, she was examined thoroughly and her wounds were much extensive than was first apparent.  It appeared she had probably been attacked twice as she had older wounds that were healing but the new ones were fresh, only 2-3 days old. She was very thin, much thinner than her very robust appearance on her last visit.  She must have been trying for several weeks to get back home where she knew she could get help and had been attacked again on her way home.

She was started on fluids, given antibiotics, more pain relief and a complete exam under general anesthesia.  The exam revealed punctures and rips to her belly, two wounds through the pouch that went into the abdomen itself causing and infection in the abdominal cavity called peritonitis. One of the bites had enough force to break the epipubic bone off one side of her pelvis.  This is the pair of bones that helps support the pouch when there is a joey in it.  Her abdomen was flushed and fortunately there didn’t appear to be any punctures into the intestines, but we did flush out dirt, grass seeds as well as numerous maggots.  There were adhesions where the intestines were stuck to the wall of the abdomen caused by the trauma. The adhesions were gently broken down so as not to cause her pain in the future.  Her numerous punctures and lacerations sutured closed and after about an hour, she was free of maggots from her ear and head wounds.

Lucky received around the clock care and after many weeks said it was time to go.  She has been released again and checks in periodically.  She is once again and robust and healthy wombat but now has a very distinctive ear to go along with her hip scar.

>> BACK TO SUCCESS STORIES 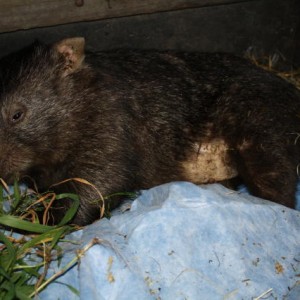 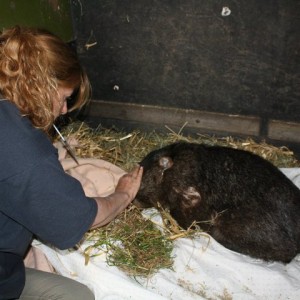 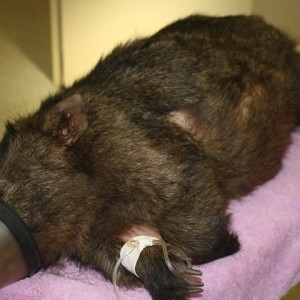 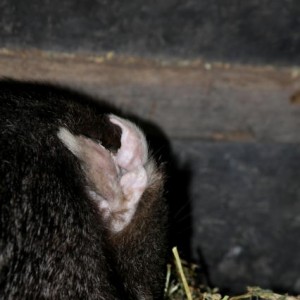 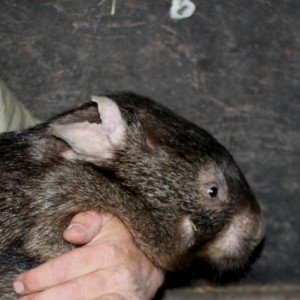 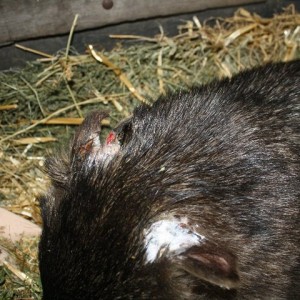 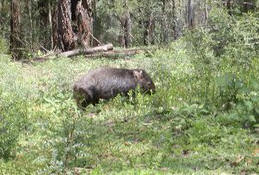